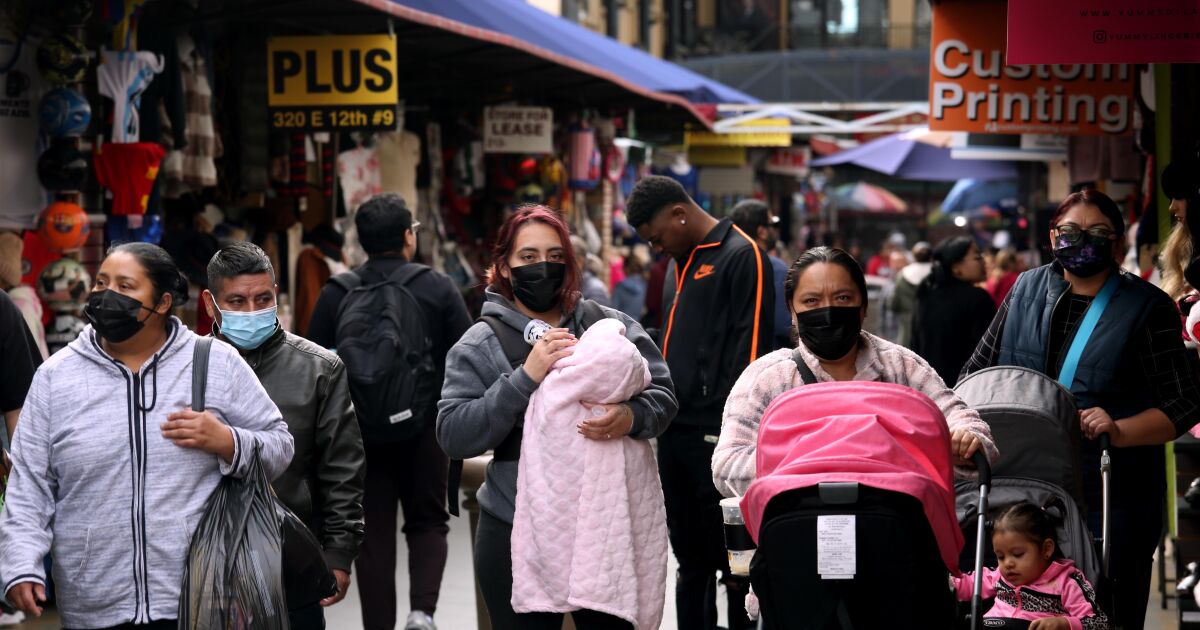 In the first two years of the COVID-19 pandemic, winter vacations were marred by a pair of devastating waves that swept through California, sending case numbers skyrocketing, residents in hospital en masse and ultimately killing thousands.

But the third winter seems to have escaped the same fate. A late fall upsurge in transmission, which accelerated after Thanksgiving, began to dissipate from mid-to-late December instead of going on the runaway train that public health officials feared . And unlike previous years, COVID-19 metrics continued to improve in the weeks that followed.

Officials stress that the danger has not passed, especially for those most at risk of developing serious illness.

There is also a chance that another problematic variant may emerge. Officials are keeping a close eye on XBB.1.5, which has been described as the most contagious edition of the virus to date.

But the fact that California navigated what was, for many, the closest thing to a normal holiday season since 2019, without a record spike in infections or an increase in hospitalizations, is cause for optimism — and this underscores the power of the tools at our disposal, experts say.

“I never say we are clear, because there are still people for whom COVID is going to remain a very big concern, and they are going to continue to have to do everything they can to avoid getting infected,” said Los Angeles County. said Public Health Director Barbara Ferrer. “We still have a lot of virus in our communities, but we’re definitely in a promising place.”

How did it happen?

Many residents likely had some degree of protection from the coronavirus because they were vaccinated, already infected, or both. This means that some were able to avoid being infected, while others’ immune systems were better prepared to avoid serious illness.

Bivalent boosters, formulated specifically to help protect against the Omicron subvariants that dominated last year, also became available in September. Absorption was too slow for some officials’ liking, but nearly 24% of eligible Californians received the updated dose.

Behavioral changes – including moving gatherings outdoors, testing before events, wearing a mask in indoor public places, and doubling down on handwashing and other hygiene efforts health – may also have played a role.

“While nothing can be said for certain, we are currently seeing evidence that our tools to fight COVID-19, including masks, bivalent booster and therapeutics, are working,” Ferrer said Thursday.

What do the numbers show?

The number of cases across California has fallen steadily since the first week of December, as have coronavirus levels in sewage.

In LA County, sewage levels began to drop in early December, although in recent weeks they have plateaued at around 70% of last summer’s peak – still a high level of concern, as defined by health officials.

“Although the sewage concentration levels are not low, simultaneously, we are not seeing the post-holiday peak that was expected by the end of the first week of January,” Ferrer said.

In San Diego County, Wooten said in a statement that “the virus is still circulating in the area. We are still seeing high percentages of positive COVID-19 tests and detecting high levels of virus in wastewater.

Other metrics also lend credence to the concept that coronavirus activity has slowed. Modeling from the California Department of Public Health estimates that the spread of COVID-19 is likely decreasing across the state and has trended downward or stable over the past month.

Although many people infected with the coronavirus have mild or no symptoms, any pronounced increase in transmission threatens to send a new wave of patients to hospitals. In 2020-21 and 2021-22, these floods were massive and placed immense pressure on health systems across the state.

Although California saw a pronounced increase in coronavirus-positive hospitalizations from late October through mid-December, that count has since plummeted.

As of Thursday, 3,168 of those patients were hospitalized statewide, down 29% over the past two weeks.

This figure includes people hospitalized for illnesses related to COVID-19 and those who accidentally test positive after seeking care for another reason.

If there was no significant resurgence of COVID-19 this winter, it would be the first time since the start of the pandemic in 2020 that a fall and winter wave would be less severe than that of the previous summer, in terms of hospitalizations.

Continued improvements prompted a parade of California counties to progress toward the low community level of COVID-19, as defined by the United States Centers for Disease Control and Prevention.

Ranking in this category depends on recent calculations of coronavirus case and hospitalization rates, as well as bed occupancy, and indicates that the burden on hospitals is relatively light.

With last week’s update, 71% of Californians now live in counties with low COVID-19 community levels, up from 28% the previous week.

As of January 10, California was reporting 355 COVID-19 deaths per week. Although this has increased in recent times, it remains below the summer peak of 396 and well below last winter’s peak, when 1,827 deaths were recorded for the week ending February 27.

More than 98,000 Californians have died from COVID-19, a toll that exceeds the entire population of cities like Santa Monica, Mission Viejo and Redding.

XBB.1.5 is one of the latest alphanumeric members of the extensive Omicron family. It is a descendant of XBB, which is a recombinant of the descendants of the Omicron BA.2 subvariant.

Much of the attention surrounding this particular subvariant has been its infectivity, as it may be the most transmissible version of the coronavirus.

XBB.1.5 now accounts for about 49.1% of all new cases in the United States, making it the most common edition of the coronavirus circulating nationwide, according to the CDC.

Although its share has steadily increased, it remains much less common in the region that includes California, Nevada, Arizona, Hawaii and the Pacific Island territories. An estimated 24.1% of coronavirus cases over the past week would be XBB.1.5, according to CDC data.

The ultimate effect of XBB.1.5 in terms of hospitalizations remains uncertain. But current data suggests the new variant is not fueling a spike.

For example, Ferrer said, Atlanta is in a region where about 31% of coronavirus specimens were estimated to be XBB.1.5. That’s double what it is for the region that includes Chicago.

She noted, however, that “there are many underlying variables that affect hospitalization rates in different regions – including local policies, vaccination rates and even behaviors that change with the weather, such as being more inside”.

“Although we should continue to monitor the impact of increased circulation of XBB and XBB.1.5 on disease severity, current information suggests that this strain of Omicron does not have a major impact on disease rates. hospitalization at the moment,” Ferrer said.